The Native American Tomahawk: History and Many Uses 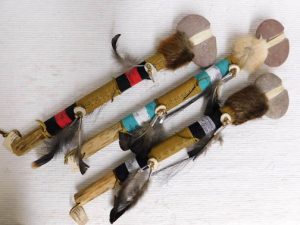 Where Did the Name Come from?

Researchers believe that the Algonquian people coined the term “tomahawk.” They mainly lived near the Great Lakes and around the northern Atlantic Coast. For food, the Algonquians hunted and fished. They also grew vegetables like corn, squash and beans.

It is thought that the word “tomahawk” is from the Algonquian words “tamahak” and “tamahakan.” The Algonquian people used both words to define a cutting tool. The Native Americans made their tomahawks with triangle-shaped stone heads that they attached to wooden handles using rawhide strips. Tomahawks can also be made from bone or shell. When rawhide begins to dry, it tightens up and shrinks, creating a secure connection.

The Spanish introduced the Algonquin people to metal blades in the 1600s. After that, the Native Americans became adept at crafting superior metal-blade weapons.

How Did Native Americans Use Their Tomahawks?

A tomahawk crafted by Native Americans looks like a regular ax or a hatchet. The difference is that a Native American tomahawk typically measures less than 18 inches long and features a straight handle. Historically, Native Americans would use their tomahawks for general purposes. The tool was lightweight and easy to use with one hand, making it perfect for cutting and hunting.

Once Native Americans started using metal heads, tomahawks became even more useful. When they made their tomahawks, they usually personalized them with their preferred decorative elements. Many tomahawks were personalized with eagle feathers to represent the owner’s bravery. They were also decorated with brass, paint and stonework such as turquoise inlay. The most common way to decorate a tomahawk was with medicine bundles. They did this to inspire the supernaturals to assist them during battle.

Native Americans have used tomahawks as weapons for several centuries. The tool is especially good as a weapon because of its adaptability. A person can throw it at an enemy if necessary or use it in a one-on-one fighting match. Tomahawks are so handy that the United States military has decided to train soldiers on how to use them.

While movies often depict Native Americans throwing their tomahawks to kill their enemies, it is highly unlikely that they did this very often. Early tomahawks that were formed from stone wouldn’t be very harmful to an enemy. Also, if they threw them at someone they were fighting, their tomahawk would be used only once. This would put them at a disadvantage in battle. However, they did throw them when hunting.

Native Americans also used tomahawks during important ceremonies. For instance, when agreeing to a peace treaty, they often buried a tomahawk (or hatchet) to symbolize the end of fighting. This is where we get the term “bury the hatchet.”