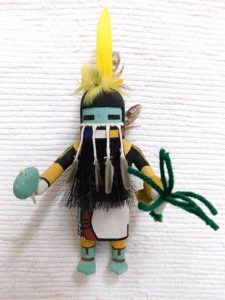 The Hopi Reservation is located in an arid geographic region, and it gets so dry that those living in communities located on its land have always been concerned about their ability to grow crops and feed their people. The struggles with the hot, dry climate brought the Longhair Katsinam.

With long, flowing locks, the Longhair Katsinam are thought to provide rain for the Hopi villages. In fact, that long hair, which was shown in facial hair through beards, and long hair flowing down their backs is symbolic of falling rain. The long black hair is adorned with eagle fluffs which represent cloud bursts, and feathers which symbolize prayers for rain.

It is the beautiful melodies and the rhythmic dancing of this large group of Longhair Katsinam and Yellow or White Corn Maidens who accompany them that is usually followed by a long and beneficial rainfall which nourishes the earth and helps the crops grow.

To the Hopi, each of the Katsinam represents something specific. Some of their purposes are as varied as stars, wind, crops, and insects as well as animals and supernaturals. Each has a specific dance and ritual as well as time of season when they are thought to appear to the Hopi people. In Hopi culture, the highest respect is given to the Katsinam.

The Hopi Katsinam, when they are not at Hopi during Katsina season, are thought to live in the San Francisco Peaks, a set of mountains near Flagstaff, AZ, that reach as high as 12,637 feet.

All Hopi Katsinam have three forms. One is the supernatural being; another is the dancer who performs for the skies and for the people; and the third is as dolls, which have historically been given to children to teach them about and to show appreciation for what the Katsinam mean to their culture.

We at Kachina House carry a magnificent selection of Longhair Katsinam, as well as a panoply of other authentic Hopi Kachina dolls. We’d love for you to stop by or check out our website to see what we have to offer.