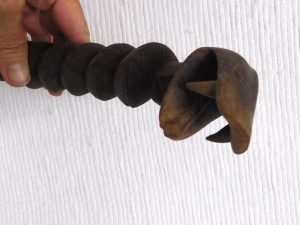 Snakes figure prominently in Native American culture. In the Ojibwa and Pueblo tribes, the ability of snakes to shed their skins associated them with fertility and new life. The Hopi people see the snake as deeply connected to the underworld. As part of the annual snake dance, participants release snakes so that they can deliver requests for rain to the underworld deities. The Cherokee also have a mixed fear and reverence for the power of the snake, which they believe is a supernatural being who has connections to the thunder gods.

The poisonous bite of several snake species led to an association with death and evil. The historic tribal lands of the Navajo are the habitat of many types of snakes including poisonous rattlesnakes.

The Navajo snake symbol associates these creatures with speed, danger and lightning.

Communities that inhabit poisonous snake territory treat the reptiles with caution. The bite of a rattlesnake could kill livestock and cause serious infection and death in humans. The Navajo people developed a general wariness around snakes. Several traditions suggest that simply watching snakes for too long can lead to misfortune. In 2015, the Navajo Nation Zoo in Window Rock removed live snakes from their exhibits because patrons tended to avoid that part of the zoo.

In the Southwest, snakes are known for their speed. One species, the sidewinder, is easily recognized by its fast, undulating motion. This may be the reason that the Navajo associate snakes with lightning. Some traditions suggest that snakes are the physical manifestation of lightning on earth. A common Navajo snake symbol in paintings is the crooked snake that resembles a lightning bolt. According to tradition, killing a snake during a rainstorm could cause lightning to strike your house. If you leave a dead snake on a rock, the Lightning People will strike and bring it back to life.

A Creature Between Life and Death

The story of Glispa illustrates the unique relationships between snakes, life and death. In one version, Glispa, a young Navajo woman, is drawn into the earth by the Snake People. She finds herself near the Lake of Emergence, the place where the first human beings came into the world. For two years, she studied with the Snake People and learned important healing arts. When she returned to the world above, she brought healing chants that were passed on for generations.

The Navajo attitude toward snakes conveys both caution and respect. Snakes are mostly a danger to those who treat them foolishly. The people realized that the best way to coexist with snakes was to keep them at a safe distance.

Learn more in our Guide to Native American symbols. The symbol of the snake is featured in a wide variety of art at Kachina House, including in Kachina Dolls, pottery, Zuni fetishes, and jewelry.