What is a Dreamcatcher? Native American History & Meaning

Dreamcatchers are one of the most well-known Native American symbols. Many people love dreamcatchers as decorations, but few know the history and meaning behind the item. Like many crafts, dreamcatchers have a rich and fascinating backstory.

If you’re interested in dreamcatchers, it’s important that you understand their history and symbolism. Learning about the item helps us respect and appreciate Native culture. 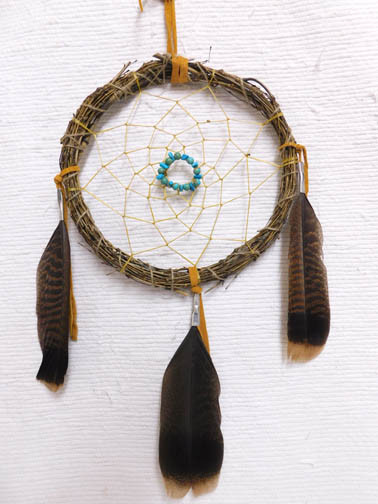 Dreamcatchers originated with the Ojibwe tribe as a protective measure against nightmares. According to legend, dreamcatchers were created by Asibaikaashi, who was also called the Spider Woman. The Ojibwe viewed spiders as symbols of protection, so the Spider Woman acted as the custodian and protector of the people in the tribe. She is credited with bringing weaving to the people.

As the Ojibwe people started to spread across North America, Spider Woman struggled to take care of them. To offer them protection while they were far away, she gave her people dreamcatchers to stop their bad dreams. Then, the mothers in the tribe followed suit and wove dreamcatchers for their children, and the craft became commonplace for the Ojibwe tribe.

The Lakota have a slightly different origin story. This tribe’s story involves Iktomi, a teacher who took the form of a spider and spoke with a Lakota spiritual leader. Iktomi told this leader about the circle of life and explained that there are both good and bad forces in the world. He advised the Lakota man to let the good forces guide him without being deceived by the bad forces.

Most anthropologists and historians believe that dreamcatchers originated with the Ojibwe. Dreamcatchers were most likely introduced to other tribes as the Ojibwe spread out geographically and traded with other tribes.

The Pan-Indian movement of the 1960s and 70s promoted unity among Native Americans. During this era, dreamcatchers became widely used by other tribes. By the 1980s, dreamcatchers had become popular souvenirs for non-native people.

Modern dreamcatchers come in all sizes, but traditional ones are usually only a few inches in diameter. Dreamcatchers are traditionally made with a willow hoop. The woven strands inside the hoop are made of sinew. Feathers usually hang from the bottom, sometimes alongside beads or arrowheads.

Each part of the dreamcatcher represents a specific theme or idea. The hoop, which is one of the most important symbols in Native culture, is a sign of unity and a representation of the circle of life. According to Native American beliefs, there is no beginning or end to life. Instead, life flows continuously. The hoop also represents the path of the sun and moon as they travel across the sky.

The web inside the hoop looks like a spider’s web. The tribal members believe that this intricately woven web will catch bad dreams out of the air, so nightmares become trapped in the web and disappear by morning. Dreamcatchers allow good dreams to make their way through the opening in the center, so the individual is gifted with good dreams while avoiding the bad ones.

The beads on the outside of the willow hoop have a few different meanings. According to some cultures, the beads are a representation of the spider. Other tribes believe that the beads symbolize good dreams that became sacred charms.

Dreamcatchers have a colorful history and beautiful symbolism. People love the idea of an item that can catch nightmares or negativity, especially for their children. It’s much easier to fall asleep when you know that something is protecting you from bad dreams.

Kachina House offers a variety of traditional and contemporary dreamcatchers. Our dreamcatchers come in a wide range of sizes, and we also offer dreamcatcher earrings, keychains, and other items. These crafts are valuable personal souvenirs and make great gifts for loved ones. To learn more, visit our shop or check out our website.