Koshare: The Sacred Clown of the Hopi

Koshare is a sacred clown of the Hopi, one that you’re likely to see at Katsina ceremonies. He is one of several clowns, which are sometimes called jesters or tricksters. He is a powerful figure and important to the community. 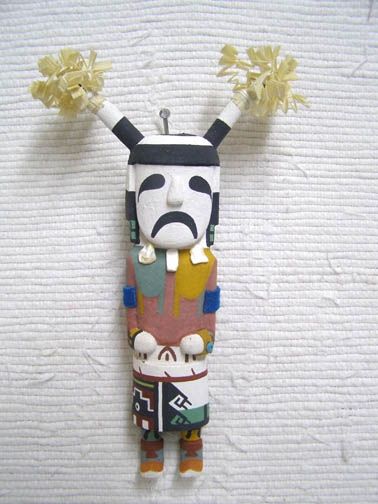 A popular image of the clown is a man that has painted himself with wide horizontal stripes of black and white. He often wears a skull cap that also features black and white stripes. Giving him an even more unique appearance are the corn husks sprouting like horns from the top of the cap. Often, the corn husk horns are Koshare’s natural hair braided up into horns with the corn husks weaved in. He covers himself with a loincloth, and dark bands adorn his arms and legs. The clown protects his feet with leather boots. You’ll notice that his face is painted white and that he has black circles surrounding his eyes and mouth.

If you’re in the presence of a Koshare, he is often making noise with a rattle and a drum. The Hopi religion associates him with fertility, sun, rain and corn. It is believed that these things give him power. He also has the double role of characterizing a paranormal spirit and being a society organizer. To involve the audience in his antics, he likes to imitate their behavior and include them in amusing skits.

These skits are serious because they purposefully depict actions that are unacceptable. The clown may decide to target any member of the audience during one of his performances, which means that no one is safe from being ridiculed or included. He has the important job of being a protector of cultural behavior customs. Those who take on the role of the clown don’t inherit the position. No one appoints them either. They choose it because the job calls to them.

Different stories exist when it comes to Koshare’s origination. Most of them feature major elements like the sun, rain, fertilization and corn. These elements are highly valued because they are vital to people’s existence, prosperity and happiness. However, the clown’s power means that the people revere and fear him. In the Pueblo hierarchy, he is highly admired and valued.

The Native Americans have experienced many instances of Europeans persecuting their revered clowns, causing them to protect rituals involving them. Because of this, tribal members generally do not talk about them. The only way that researchers have been able to learn more about him and his comrades has been to study anthropological papers and consider all clowns and what they mean to people and societies.

Going Back to Egypt

The idea of ceremonial clowns dates back to around 3,000 B.C. Egypt, and you can see them in a number of world cultures throughout the past. Clowns are depicted in many forms. For instance, during the medieval era, jesters provided humor. They were similar to Koshares in that they also performed societal lessons for the people in Europe’s royal courts.

Another example is the clown of the Northwest Coast Indians, which is the raven. He signifies the trickster. For the American Southwest Indians and those in California, the clown is the coyote. American kids from the mid-twentieth century are likely familiar with a number of cartoon character clowns while the silver screen made clowns like Charlie Chaplin and Peter Sellers famous.

To Puebloans, Koshares are extremely valuable. They maintain an almost religious standing in the community, and they are considered powerful. Koshares are teachers, ones who work to preserve harmony within their community. At Kachina House, we offer various Kachina and Katsina dolls. We have a large inventory made in the Hopi Old Style, so you’ll know that you’re purchasing an authentic piece. We have many different depictions of clowns. Take a look at our extensive offerings today.