What Is A Kachina Doll? 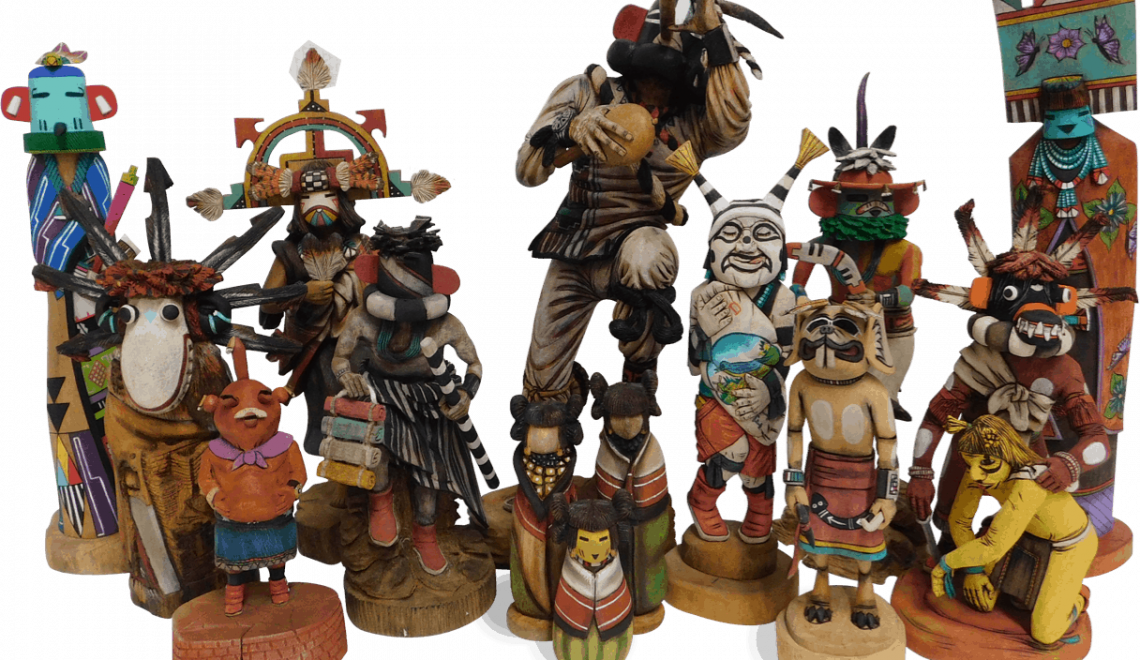 A Kachina doll can be a wonderful addition to a Native American art collection or the perfect travel memento of a trip to the Southwestern United States, but the spiritual and cultural significance of Kachina dolls goes much deeper than their value as souvenir items. Referring to these figures as dolls often leads to the assumption that they are primarily feminine representations, but Kachinas actually depict a wide variety of plants, wildlife and mythical beings as well as men and women. The name is Kachina is primarily used by the Navajo people while these dolls are known as Katsina or Katsinam among the Hopi.

Each Puebloan Kachina figure is believed to be the repository of specific powers that are represented by the doll’s physical appearance, clothing and implements. The majority of Kachinas, even those that depict animals, birds and other non-human entities, appear to be human or human-like in form. Antelope, bear, bison, butterflies, deer, eagles, lizards and wolves are popular animal and insect subjects for Kachina dolls. Kachinas that represent chiefs, priests, grandmothers, clowns, dancers, musicians, hunters, young women and other human beings are also popular. Plant-styled Kachinas include dolls that represent cacti, peppers, maize, squash, beans and other flora native to the Southwest. The iconic Southwestern figure Kokopelli is an example of a frequently depicted mythical Kachina character. He generally appears with his flute, elaborate headdress and a pack that contains seeds and gifts. Ogres and other stylized creatures are also commonly represented.

The Spiritual Significance of Kachina Dolls

Although Kachina dolls are beautiful artistic creations, they are more than just collections of materials that have been assembled for their visual appeal. Various Kachina figures are believed to aid in the growth of crops, boost the fertility of humans and animals, promote good health, assist hunters in acquiring game, facilitate good relationships between individuals, families and tribal units and bring sunlight and rainfall at the appropriate times. Some dolls also serve as the embodiment of less desirable elements such as human anger, physical illness and disability, antisocial behavior, the uncertainties associated with daily living and the unforgiving aspects of the natural world.

Today’s definition of what a Kachina doll is includes figures that incorporate modern foods, clothing items and elements of popular culture as well as dolls that are based solely on traditional motifs. Hopi dolls feature a body carved from cottonwood root. The figures are then painted, dressed in traditional fabrics and embellished with feathers, stones and other culturally appropriate decorations in the traditional style. Kachina dolls produced for the tourist and collector’s markets are available in sizes that range from miniatures of six inches or less to full-size versions of 12 inches or greater. At Kachina House, we stock the largest selection of Native American Hopi Katsinam and Navajo Kachinas anywhere, with over fifty different Navajo Kachinas in six different sizes including hundreds of miniatures and many large and fancy Navajo Kachinas. We have Katsinam carved by more than 100 Hopi carvers at virtually any time.