What Are Navajo Ghost Beads? 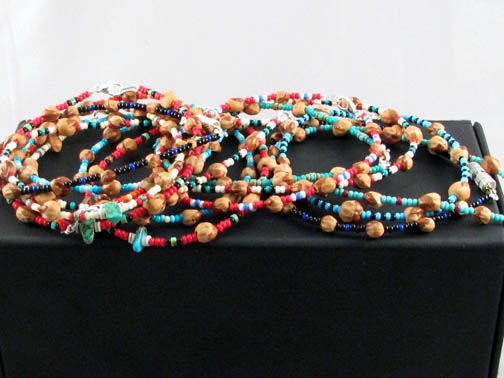 Ghost beads are a common adornment among the Navajo people of the Southwestern United States, but they are more than just mere decoration to those who wear them. Ghost beads are thought to represent a connection between the earth, trees, animals and humans. The jewelry is said to bring peace, harmony and safety to the wearer. Many Navajos will keep these beads beside them when they sleep since these beads are traditionally believed to ward off nightmares caused by evil spirits. They are also believed to ward away negative energy throughout the day.Ghost beads are a common adornment among the Navajo people. Learn about how ghost beads are made, what they’re made of, and what they represent.

How Are Navajo Ghost Beads Made?

Ghost beads are dried juniper or cedar berries that are usually lightly smoked and strung in a classic manner. Often, they will include glass beads intertwined with the berries if they’re in short supply. The berries are only collected after they have fallen to the ground and have been eaten by ants. The ants go in one end of the berry and devour the insides, leaving a hollow dried skin. An artisan will make a hole in the other end to complete the bead’s creation.

Why Are Juniper Berries Used?

Juniper berries have a special cultural significance to the Navajo people. They have always been one of the most common food staples in the region, so they are inextricably connected to life and light. Many Navajo people use them to treat diabetes today. They are also believed to provide spiritual protection when needed. In earlier times, it was customary to smear juniper ashes on one’s face before going out into the darkness.

By the same token, shaking out a bedsheet at night was believed to attract negative spirits. To ward them off, juniper ashes would be sprinkled across the bed. If a stranger entered a community, then people would keep ghost beads on them before shaking their hands to avoid being cursed.

How Are They Used Today?

While many people still wear them or keep them in bedrooms, they are also kept in offices or on the rearview mirrors of cars. In any of these places, they are still used to drive away negative energy and provide peace and tranquility to the bearers. Although they are still predominantly worn by the Navajo and Ute peoples, other groups respectfully obtain them either for protection or simple decoration. Find Navajo-made ghost bead necklaces, bracelets, and other Native American jewelry at Kachina House.