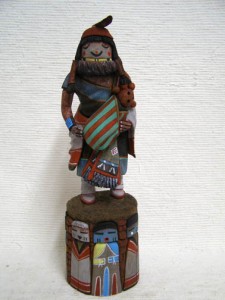 Native American cultures treat elders with a great deal of respect. Those who have lived longer are looked on as wise souls and indispensable communicators of tribal traditions and customs. For the Hopi, the Grandmother Katsina is among the most cherished, “The Mother of all Katsinam” (a title she shares with Crow Mother).

Grandmother Katsina could be thought of as the Mother Earth of the Hopi people. Her Hopi name is Hahay-i wu-uti, which translates into “pour water woman.” In many paintings and carvings she is shown pouring water out of a gourd from one hand. This represents the pouring of life around the world. In her other hand, the Grandmother Katsina is often holding an ear of corn, a symbol of the nourishment she provides to all beings.

Grandmother Katsina is featured in some of the most important Hopi ceremonies, including the Water Serpent and the Bean Dance (Powamuya). In the Water Serpent Ceremony, she serves as the main participant. Her unforgettable appearance is augmented by her tendency to speak a great deal, in a loud, high-pitched voice. Her specific purpose varies between ceremonies. In some, she demands to be fed by villagers; in others she provides food to children, blessing them with water.

Grandmother Katsina is the wife of Eototo the chief of all Katsinam. She augments his authority, providing a female role. Her children are the monsters, the Nataskas, over whom she holds strict and demanding authority.

It is Hopi tradition for all infants to be presented with a flat-form Grandmother Katsina doll (tihu) when they are born. On other occasions, particularly during Powamuya, dolls are gifted to the children.

At Kachina House, we carry a selection of Grandmother Katsina dolls, including those in the Traditional or Old Style as well as the Contemporary Sculpture or Full-figure styles.