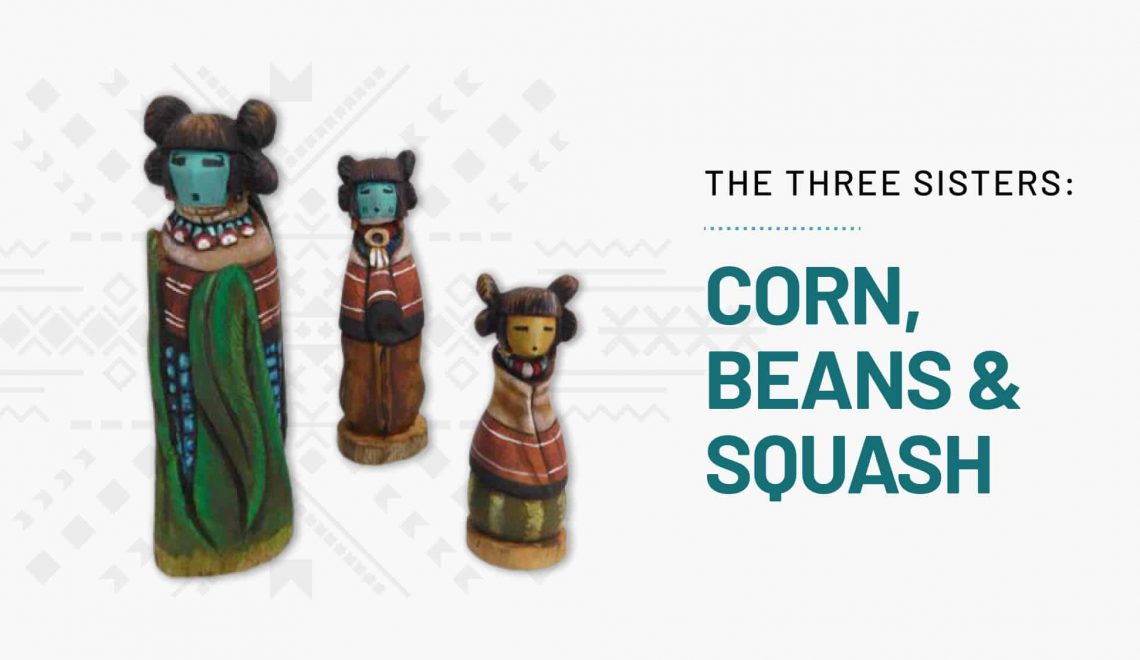 If you’re a gardener, you might recognize The Three Sisters as a companion planting technique. It involves growing corn, pole beans and winter squash on the same plot to produce mutual benefits for the plants. The result is maximum yield with minimal effort.

The Legend of The Three Sisters

But The Three Sisters is more than an agricultural method. It’s a legend that is shared by many Native Americans. Each Indigenous nation tells a slightly different version of the legend. But stories always evolve as they reflect the shifting of the times.

As the Iroquois tell it, three sisters lived in a field. The youngest wore green and scrambled along the ground. The middle sibling could always be seen wandering about in her yellow dress. The oldest was tall, with bright yellow hair and a green shawl.

The girls were captivated by a boy who would visit the fields, talking to the animals and communing with nature. Late one summer, the youngest sister disappeared. The middle sister followed suit in the fall. As winter threatened and the oldest sister mourned, her hair dried out and her shawl lost its color.

When the boy saw this sister grieving during the harvest season, he gathered her in his arms and brought her to his home. There were the missing sisters. They had followed their curiosity to the boy’s home, where they remained sheltered in preparation for winter.

The sisters helped the boy cook a feast, and they were never separated again.

What Is a Three Sisters Garden?

In a Three Sisters Garden, beans represent the youngest sister, squash represents the middle and corn represents the eldest. They have a symbiotic relationship, each supporting the other’s growth. Like sisters, they help each other thrive.

Beans replenish the soil with nitrogen, which nourishes the corn. As the corn grows tall, the beans can wind themselves up the stalks. The squash leaves meander close to the ground, shading the plants’ roots, containing moisture and preventing weeds from proliferating.

These gardens are traditionally planted in mounds or small hills. The technique allows you to grow a variety of nutrient-dense vegetables in a small plot. It reduces the need for water and naturally deters pests.

Stagger the planting schedule. Corn seeds go in the ground first, once the ground has warmed up and is no longer soggy. Plant the beans two to three weeks later. By the time the beans are searching for a stalk to attach to, the corn will be strong enough. Sow the squash seeds about a week after the bean plants have sprouted. This will ensure that your beans will grow large enough before the squash leaves cast shade on the plot.

You can often harvest the bounty at the same time. However, different varieties of plants will reach maturity at distinct times.

There is a reason that this Native American farming method has persisted for centuries. The Three Sisters planting technique is sustainable and works with nature instead of against it. Plus, corn, beans, and squash make a delicious soup.