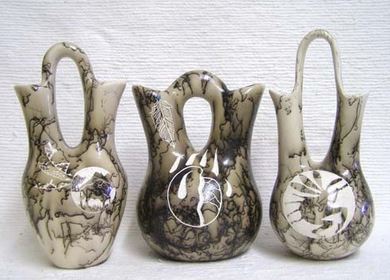 Every culture has its own traditions and customs when it comes to weddings, and Native Americans are no different. One cherished tradition centers around a wedding item still used in Native American weddings today: the wedding vase.

A Native American wedding vase is unlike any vase people generally think of. They are visually designed in the style of Native American arts and crafts, usually made of clay. Ornately designed, these beauties also bring great symbolism, which is why they are so valued in the culture.

Considered a sacred tradition in many Native American tribes, incorporating a wedding vase in ceremonies was especially prized by the Pueblo and Navajo peoples.

Traditionally, the groom’s parents make and paint the vase a week or so prior to the ceremony. To ensure the vase can be drunk out of, the clay is cleaned and filtered. Once the vase is finished, a ceremony takes place with both families.

During the ceremony, the couple’s parents share marital advice and the couple ceremoniously drinks from the vase to represent the “blending of their lives.” The couple would traditionally drink nectar from the vase; today many couples use water or tea.

Traditionally, the bride drinks from the vase first. Turning it clockwise, she then hands it to the groom so he can drink from the same side. The couple then repeats this and both drink from the opposite side.

To close the ceremony, the couple then drinks from the vase at the same time. Similar to American wedding traditions, there’s also symbolism and superstition with this practice. If the couple successfully drinks out of the vase without spilling, they will have a “strong, cooperative” marriage. This practice is similar to the American tradition that the number of bows a couple breaks when opening wedding gifts at a bridal shower will represent how many children they will have.

After the wedding, the wedding vase becomes a prized possession in the couple’s home.

Kachina House offers a wide variety of handpainted and handmade authentic Native American wedding vases. Hopi, Navajo, Jemez and Acoma are among the tribes from which these treasures come.