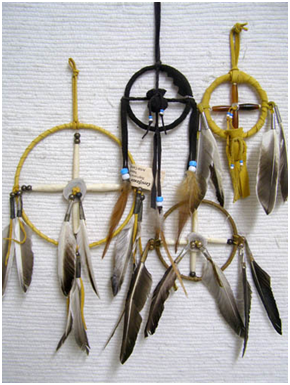 Also called “The Sacred Hoop,” the Native American medicine wheel symbolizes the life journey each of us takes. The medicine wheel can be seen in many different forms, from artwork to large physical constructions which allow for deep contemplation as one walks through them.

Found in Big Horn County, Wyoming, one of the oldest known medicine wheels measures 75 feet in diameter and is thought to have been built more than 300 years ago. This circular stone arrangement has 28 spokes that are thought to symbolize the days in a lunar month.

The four sections are typically colored white, red, yellow and black. Their locations and meanings within the wheel can change according to specific tribal beliefs.

But what does this have to do with medicine? The term “medicine” has a very different meaning than that we typically think. The Native American medicine refers to the energy and power of nature as well as a person’s ability to gain knowledge and become more fulfilled.

Used as a sacred space where individuals can center their consciousness and honor the forces of nature, the medicine wheel can aid you in finding direction in life.

To purchase a medicine wheel, visit Kachina House online or at 2920 Hopi Drive in Sedona, Arizona.