The Importance of Shapeshifting in Native American Culture 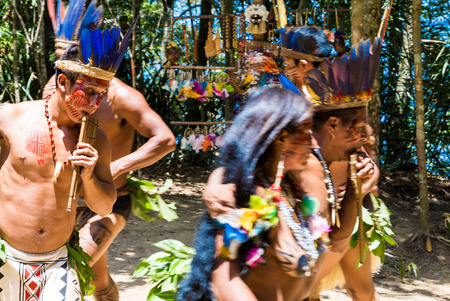 When people hear the word, “shapeshifter,” they may think of supernatural figures like witches and werewolves. But the spiritual practice of shapeshifting travels well beyond a mythical and supernatural scope.

A non-Native study of shapeshifting posits that the practice was used by medicine people and shamans to transform into part animal to cause harm and destruction rather than good by shooting pieces of bone into their victims, much like a witch would.

Tribes such as the Navajo, however, talk about a more positive role shapeshifting plays in the formation of Native American culture. Often referring to the practice as “skinwalking ,” shapeshifters transform into the bodies of bears, wolves, and eagles for the purpose of healing and protecting their communities.

When does Shapeshifting Occur?

Shapeshifting trains our egos to let go and become shapeless so that we can take on the qualities of our chosen animal. This process occurs during Native American song, dance, war ceremonies, and hunting rituals and takes great nimbleness.

The most common form of shapeshifting happens through dance. The dancers dress themselves in feathers and animal pelts to activate the divine animal spirit in their movements. Instead of moving as the eagle would, the dancer is the eagle, propelling himself in short bursts of momentum and hurling their arms in controlled, swinging movements. This ritualistic dance engages their core, mind, and heart in an out-of-body experience where physical human limits presented by the everyday world do not exist.

In hunting, the shapeshifter is associated with cunning, courage, loyalty and strength. They are central figures in both Zunis and Shoshone mythology and are a clan animal for tribes like the Cherokee and Chippewa. The wolf and Native Americans were closely linked during the time of the early settlers, so much so that they would often kill the Native American in the same way they would the wolf. Native Americans learned the ways of the wolf to improve upon survival techniques and to outwit their enemies.

People who can correctly shapeshift come in touch with their instincts. They can appreciate the spirit of our ancestors and the spirit in all livings things. Understand the world through a Native American perspective at Kachina House, where our showpieces tell a story of their own!