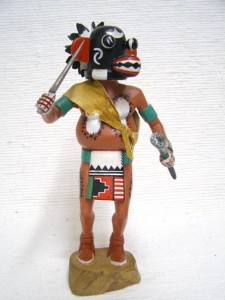 The Hopi people have their own unique calendar that coincides with the cycles of the sun. The ceremonial calendar is divided into two sections—Katsina Season and non-Katsina Season.

During the summer months of the non-Katsina Season, Hopi villagers operate on a regular harvesting schedule. This time includes the Tala’paamuya (August), Nasanmuya (September), Toho’osmuy (October), and Kelmuya (November), during which a variety of social dances and ceremonies occur.

As the colder months arrive, Hopi villagers seek guidance and assistance from the Katsina spirits. The Katsina season begins at winter solstice, when figures representing the Katsina spirits return to Hopi villages. This occurs during the Kyaamuya (December) ceremony, a time of planning and preparation culminating in the arrival of one of the Chief Katsinam who, on the last day of the ceremony, ritually opens the kivas for the season.

The Katsina season continues through the coming months with ceremonies that prepare the Hopi for changing seasons, planting and harvesting, and require members of the community to fulfill their responsibilities. In Wuko’uyis (June), the planting season is fully underway and Katsinam appear in villages at sunrise for a dance.

Finally, Talangva (July) recaps the entire Katsina season, climaxing with the Niman ceremony shortly after Summer Solstice. Crops and plant life are flourishing as Katsinam arrive at dawn with gifts. After much merriment, all the brides of that year are given a special blessing, and the Katsinam depart for their spiritual home in the San Francisco Peaks with the prayers and blessings of the Hopi people.