The Hopi Ceremonial Calendar by Month 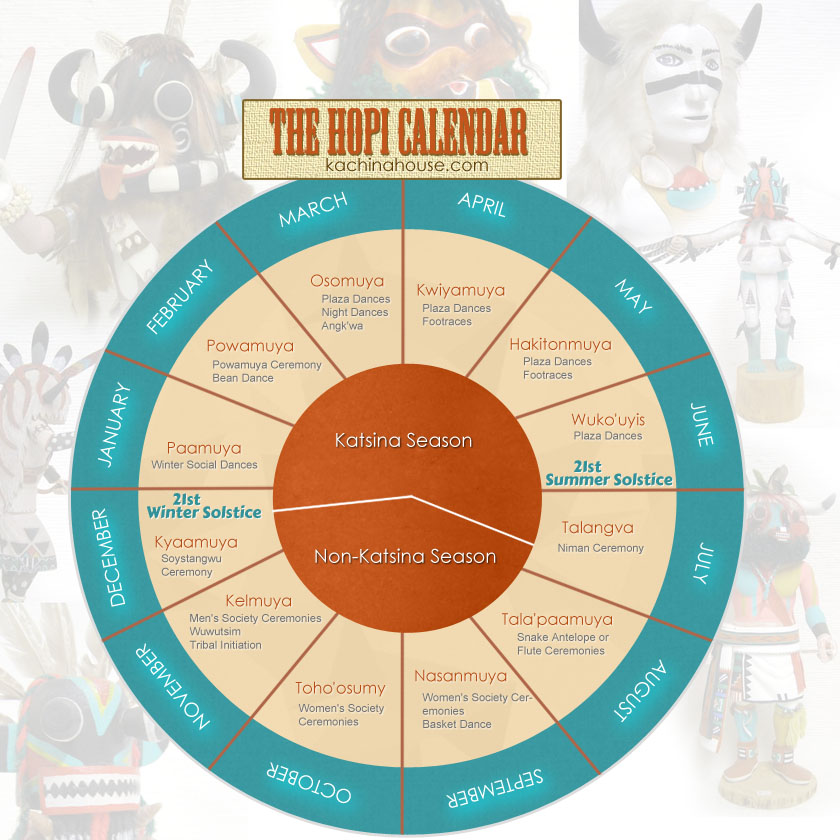 Although most of us consider January the first month of the year, according to Hopi customs it is actually the month of November that represents the start of a new cycle. The Hopi calendar is divided into two seasons – Katsina Season and Non-Katsina Season. During each month, different ceremonies and festivities occur in celebration of life and the growth of the crops.

Kelmuya, which takes place during the month of November, marks the beginning of the Hopi cycle. Men’s Society ceremonies take place and prayers are held for peace.

A quiet time of storytelling and private ceremonies, Kyaamuya takes place during December and is highlighted by the Soystangwu Ceremony. It is during this ceremony that the first Katsinam return to the Hopi villages, sleepy from their resting period in the San Francisco Mountains.

Now that the Katsinam have returned to the Hopi villages, the winter social dances of Paamuya begin. This is a festive and celebratory time that is anticipated throughout the winter season, with dances occurring inside the kivas at night.

Powamuya is celebrated during the month of February. Both serious and joyful in nature, the festivities show an eagerness for the growing season to begin. During this time, the Bean Dance occurs and the Katsinam share bean sprouts with the Hopi people.

Eototo, Aholi, Ahola and the Bean Katsina are some of the most popular figures to appear during this month.

A time that encourages harvest growth and rain, Osomuya takes place through the month of March. Night Dances are held in each village, and Katsinam visit with offerings of food that will begin to grow in spring.

Kwiyamuya is a joyous time of celebration that coincides with the beginning of the April growing season. Katsinam like Handprint Racer, Dragonfly Racer and Cricket Racer visit the village, racing men and boys and teasing those who do not win. At the end of this celebration, the Katsinam head home with the peoples’ prayers for a healthy growing season.

Hakitonmuya, or “the waiting season,” takes place during the month of May. The first crops are planted during this time and Katsinam like the Planting Katsina and the Longhair Katsina come to dance in the plazas and bless these early crops.

Corn and other important crops are planted during Wuko’uyis, a time when Katsinam and Hopi people are filled with joy. This celebratory period coincides with the month of June and involves Plaza Dances almost daily.

The Corn Dancer is a prominent figure during Wuko’uyis, as he represents the different types of corn grown by the Hopi people.

The Talangva season occurs in July and includes the ever-important Niman Ceremony. This month involves many feasts and dances, as it is a time when the Katsinam say goodbye and return to their home in the spirit world until the next year.

One of the most well-known Niman Ceremony visitors is Hemis Katsina.

Tala’paamuya occurs in August, after the Katsinam have left for their home in the San Francisco Mountains. This month marks the beginning of summer social dances, including the Snake-Antelope Ceremony and Flute Ceremony that alternate year-to-year.

Social dances are often held as a way to say thank you for the crops that are growing and the good summer season experienced.

Nasanmuya is a time of feasting and celebration, as many of the crops are finally ripe for picking! Women’s Society ceremonies are held, often in thanks of the crops that have grown through the summer season.

Another month of harvest time, Toho’osumy takes place in October when the corn is finally ripe. The men gather the produce, bringing all the food to the women for preparation and storage. More Women’s Society ceremonies occur, including the Basket Dance.

Home to a wide variety of Native American made crafts and collectibles, Kachina House has many Hopi-made items for sale. Shop with us online or give our Sedona, Arizona shop a call at 866-587-0547 for assistance finding a particular piece. 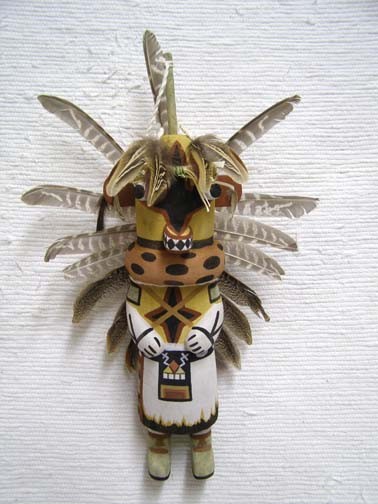