The Four Sacred Colors Of The Navajo

As you’re browsing the wide selection of handmade Navajo art at Kachina House, you may have questions about the meaning and symbolism behind these traditional Native American arts and crafts. For example, are you familiar with the four sacred colors of the Navajo? Navajo colors have deep meaning which are reflected in these works of art.

The four sacred colors of the Navajo are black, white, blue, and yellow.

What do the four sacred colors represent? 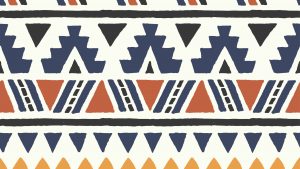 In traditional Navajo philosophy, the number four appears throughout. Four directions, seasons, colors, first four clans, and more. In most Navajo rituals, there are usually four songs and other symbolic uses of the number four or its multiples.

How do they tie to the creation story?

The creation story told by the Navajo is called the Emergence. In this story, First Man took four stones and scattered them in four directions:

North. Represents the north peak of Hesperus Peak, or Dibé Ntsaa, in southwestern Colorado. Stands for night. Black represents aggression and was widely used in preparation for battle, such as face painting.

First Man blew on these stones four times, and they formed a hogan. In Navajo culture, a hogan isn’t just their traditional shelter, it also has sacred meaning and still plays an important role in Navajo spiritual and community life. In the Emergence story, the hogan created by First Man became the world and the four sacred mountains of the Navajo world.

Traditional Navajo artists use these colors in many different ways, for both cultural symbolism and aesthetics. Artists use colors in both subtle and complex ways, as each color can have multiple meanings. The artist can use color to connect the past, present, and future; to represent spirituality, geography, and art; to encode deeper meanings and to educate and preserve their traditional culture.

Enjoy browsing our varied Navajo arts with this additional knowledge about the meaning behind the colors.