Perched atop a sandstone mesa about one hour west of Albuquerque, New Mexico, sits “sky city.” This is a fitting description for the Acoma Pueblo, which is home to what is believed by some to be the oldest continuously inhabited indigenous village in North America. This area is perhaps best known for the pottery that has been crafted by its native inhabitants since 1150 AD

Acoma pottery was originally created for its function. Water jugs were used on hunting trips and long 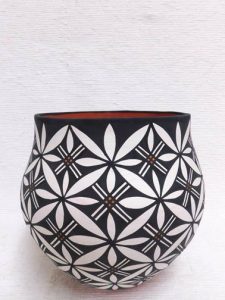 journeys. Pots were used for cooking and eating. Jars were designed to store various items. Today, collectors may purchase Acoma pottery for its aesthetic appeal, but its form can tell us a great deal about the culture and its history.

For example, the pottery was glazed before the 1680 Pueblo Revolt. After that, the Spanish seized lead mining sites in the area, cutting off the Acoma peoples’ access to the mineral that was necessary for glazing. The people continued to make pots but retained their matte, natural finish.

However, some of the Acoma people realized the need to keep the tradition alive. They taught their descendants the conventional methods for harvesting, cleaning, carving, and shaping the clay. The women who sustained the tradition are now known as the Four Matriarchs.

How Is the Pottery Made?

Acoma pottery is made from natural materials. The walls are made from slate-like clay that is collected in the region. This clay has the unique feature of retaining its strength when fired, which allows the pots to have thin walls and delicately fluted rims. Minerals from the earth are crushed to make pigments that are painted onto the pots.

This pottery was traditionally hand-coiled. Then, the artisan would scrape the interior and exterior to create a smooth finish. Some modern artisans use molds to craft the pieces. The customary way to fire the vessels was outdoors using an open pit. Today, modern kilns are often used.

How to Identify Acoma Pottery

Acoma pottery is recognized for its thin-walled, white backgrounds and polychromatic geometric designs. The patterns range from basic to extremely complex. However, the colors used are simple. The designs are typically painted in rust, black, and white. Acoma vessels are usually jars and bowls.

The Acoma people use symbols that reflect nature, such as:

Many of the geometric patterns are organic and suggestive of flowers and plants. Others include a series of shapes and lines.

Handbuilt and handpainted by Native American artists, shop authentic Acoma pottery in various patterns and sizes at Kachina House. We carry a wide selection of items handcrafted by the indigenous peoples of North America.