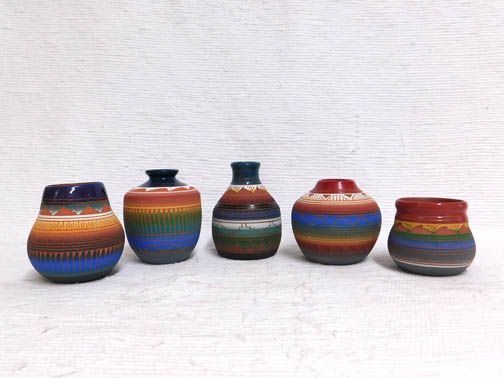 Native American pottery is a tradition based on functional necessity and identity. The first pieces of pottery made by the Native Americans can be dated back to about 4000 B.C. While many tend to associate Native American culture with what we now know as the American Southwest, that’s not where the first pottery pieces were discovered.

The first remnants of Native American pottery were actually discovered in Augusta, Georgia. As the years have passed, there have been additional pottery findings from the B.C. period in Florida and Missouri. This has fostered the belief that Native American culture is not solely defined as encompassing just the southwestern portion of America as previously thought. Instead, Native Americans were spread from coast to coast, with pottery being a key part of their culture. 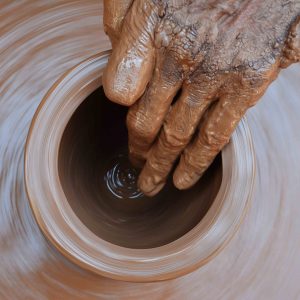 Facts About Making Pottery
Native American handcrafted pottery is highly unique and prized. There are two basic techniques used to construct this pottery, slab and coil. Pottery would be created by mixing clay and tempers, such as crushed rock, crushed shells, charcoal, wood ash, and plant fibers. These tempers are combined with clay and water to prevent the clay from naturally shrinking and cracking during the drying and firing process. The clay is then kneaded by hand to eliminate unwanted air bubbles and mix the tempers evenly with the clay. Once all the air bubbles are eliminated, the clay is formed into the desired shape using only the potter’s hands and the slab or coil method. Once shaped, the pottery goes through sanding, polishing, decorating, and firing to create the finished pottery products you see today.

While pottery was developed as a functional tool to carry liquids like water, it has developed into more of an artistic stamp for tribes. There were countless Native American tribes spread throughout the country; however, many of their pottery-making traditions were similar.

The use of outdoor scenery and animals has long been a common trait in Native American pottery. Some popular designs are deer, bear, butterflies, lizards, and birds. Many larger pottery pieces were constructed with an indented base so they could be carried on the head with ease. As Native Americans transitioned from hunter-gatherer cultures to farming cultures, these indentations became more commonly seen. 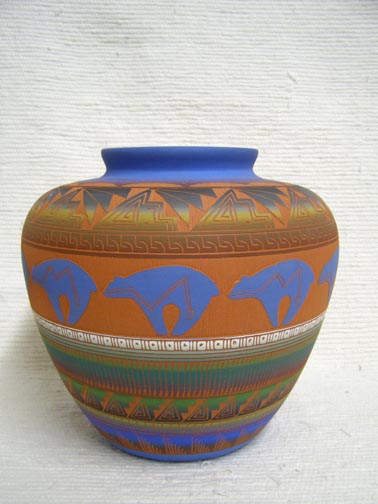 As with most pottery developed in the Native American cultures today, one will notice the use of color. Traditionally, color was used as a way to code the bottom of the pottery like an artist’s signature. However, it has developed into a way to provide a decorative finish to the pot.

In contemporary times, Native Americans have utilized ceramic pottery (the shape comes from a mold) and then finished the pieces using several methods. One popular method is horsehair. Using this technique, the potter places strands of hair on the very hot surface of a pot that has just been removed from the fire (kiln). The hair burns onto the piece catching fire. The black lines are the remnants of the hair, the grey is the smoke from the fire.  Historically, this pottery would have been created to honor a fallen horse, or a very brave horse who brought his rider to safety.

Another popular technique is etched pottery. Here the potter paints the air-dried clay and incises it with various Native American designs. The pottery is then fired.