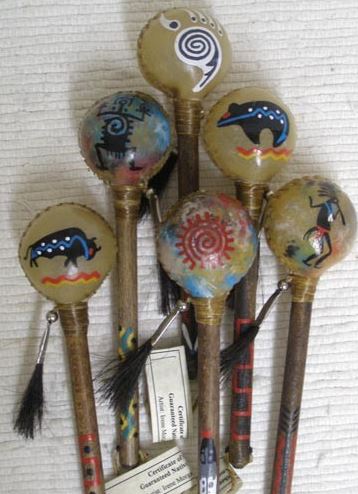 Few people know that a rattle, typically associated with an infant, is also an integral part of Native American culture.

Rattles in Native American history are a vital part of life and culture, often referred to as “shakers.”

Shakers were used in spiritual ceremonies, to help clear minds during prayer and to keep the beat during song. They are one of the most common instruments used during ceremonies, both spiritual and otherwise.

While not all Native American tribes have used drums in ceremonies and public gatherings through history, all used rattles. As a result, the rattle or “shaker” has been a symbol of Native American heritage and custom for many tribes.

Most rattles were made from some type of animal shell, rawhide or leather, with corn, small rocks, beans, or seeds placed inside to make the sound. The rattles would be decorated with feathers, beads, and other natural materials. Some tribes, including the Navajo, use turtle shells for their rattle head.

Rattles often represented the three kingdoms or nations, which are important to Native American belief. The turtle shell represents the animal kingdom, with its use of shell to create the rattle head, the mineral kingdom with the use of rocks to create the sound, and the plant kingdom, with the wooden handle.

Rawhide rattles were most common, and each tribe had specific rattles that they would create. Each tribe would use different beads, colors, and designs, which served as an indicator of which tribe created the rattle.

Native American rattles are an instrument of storytelling, ceremony, and historic culture.

At Kachina House, we have a vast collection of rattles to choose from among other Native American arts and crafts.