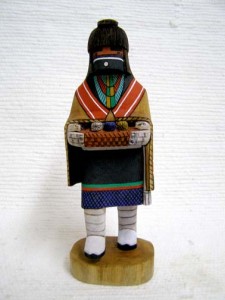 Creation myths and stories play a large part in cultures across the planet. Of all the questions we as a human race have, one looms large above all others—where did it all come from? It’s interesting to study how different belief systems have met throughout history, trading their ideas about how it all began; unfortunately, sometimes amidst violent conflict. However, one thing seems to unite all; they seem to have at least asked the question.

Among Native American cultures—the Navajo and Hopi people as well as many others—creation would not have been possible without Spiderwoman, or Spider Grandmother as she’s sometimes called. Spiderwoman is a mythological figure who is credited with varying amounts of responsibility for forming the finite world.

It is believed that Spiderwoman contributed to bringing the natural world into existence through her knowledge of weaving webs. Some cultures believe she was given the power to create life from Sotuknang. It is said that with a mixture of saliva and earth she formed two beings then sang a creation song to bring them to life, attaching a thread to each one to provide them with creative wisdom. She used a similar process to form the animals on Earth and made all plants, flowers, and trees to cover the landscape.

Spiderwoman and her role in Native American creation myths goes hand-in-hand with the idea of the Earth as a motherly womb that gave birth to all life-forms, and the principle of feminine creativity in all of life. Native Americans recognize and respect the idea that new life comes from the mother.

This idea of feminine creativity also contributes to the role of Spiderwoman as an authoritative teacher of critical survival skills, such as growing food and making pottery. In the Navajo tradition, she is credited with teaching their people how to weave. In fact, there is a ceremonial tradition of rubbing one’s hands in spider webs to prepare for weaving.

At Kachina House, your source for Native American arts and crafts, we have a variety of Spider Woman Weaver Katsina dolls as part of our large collection of authentic pieces.