Navajo Thunderbird: Myth and Meaning of this Powerful Symbol 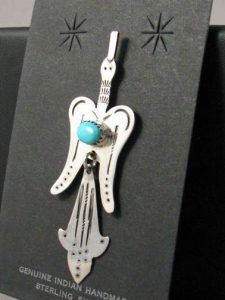 Thunderbird Is a Recognized Symbol

The Thunderbird is central to Native American mythology. Thunderbird images appear in the artworks of Plains, Southwestern, Northeastern and Pacific Northwestern tribes. Each has their own legend of this powerful spirit.

First People called this bird Thunderbird because the flapping of his powerful wings sounded like thunder. When he was angry, lightning would shoot from his eyes.

The Gros Ventre believed Thunderbird gave the sacred pipe of peace to humans. Among Plains tribes, Thunderbird was the deity of the summer season, and White Owl represented the winter months. The Winnebago believed that a man who dreamed of the Thunderbird was destined to become a great leader.

The Navajo Have a Special Reverence for Thunderbird

To the Navajo, Thunderbird is a sacred symbol with many meanings. They believe Thunderbird protects them, warns them of approaching danger and nourishes their crops.

Like all birds, the Navajo Thunderbird is also a spirit guide. Many Navajo believe the Thunderbird guides the souls of the dead through the underworld. Thunderbird comforts them on the long journey and protects them from danger.

Thunderbird has many deep, spiritual meanings to the Navajo. He is a powerful, generous spirit who can control the skies.

The Navajo have a long, rich tradition of silversmithing. In the 1800s, they learned to work silver from Mexican jewelers. Navajo-made silver items, including buckles, squash blossoms, horse tack, pendants, rings and bracelets became famous for their striking beauty and unusual designs.

Navajo jewelers worked with many stones, but they preferred turquoise, which they considered sacred. Images of the Navajo Thunderbird were common in these pieces.

Initially, they made jewelry for ceremonial purposes, but that changed when they realized how popular their jewelry was to non-Navajo. The Zuni were the first tribe to sell jewelry to non-Natives. Today, Navajo silver jewelry is considered some of the finest in the world.

At Kachina House, we are proud to offer high-quality pieces of Navajo jewelry. Here are a couple examples with Thunderbirds.

The first is a silver Navajo pin in the shape of a Thunderbird with a single turquoise stone. Made in the 1970s by Jason Livingston, it is in pristine condition and features the fine details that characterize Navajo silversmithing.

The second is a pair of turquoise and silver earrings made by Navajo silversmith Lorien Chee. These striking earrings feature a curved Thunderbird shape that blends traditional and modern styles.

Wear the Power of the Thunderbird

Carry the power and protection of the Thunderbird when you wear this gorgeous jewelry. As the largest distributor of Native American arts and crafts in Arizona, we have an unmatched selection of jewelry, pottery, Katsina dolls, and more. To see our full selection, visit our online showroom.