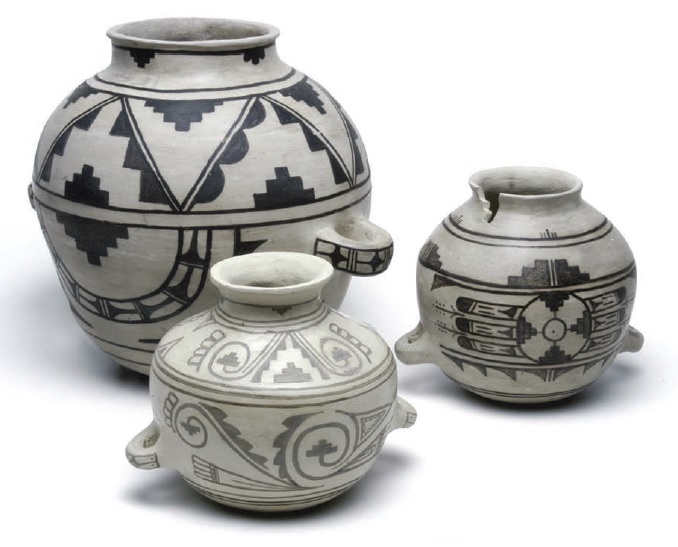 When ancient settlers rooted themselves in the deepest pockets of present-day New Mexico, they brought their expert craftsmanship and magnificent artistry with them. The Puebloan, Hohokam, and Mogollon were some of the civilizations that conquered these Southwest regions, and their presence ushered in a new era of ingenuity. Decades later, the Navajo and Apache tribes grew more prominent, which sparked even greater growth and development. To ensure that the Spanish wouldn’t completely destroy their customs and heritage, these societies displayed their culture through art.

More specifically, they made pottery, infusing their pride and traditions into each piece. Before the Spanish arrived in the 16th century, nine unique types of Southwest Native American pottery had been created. Of these nine, four were decorated using ceramic glaze. Another non-glaze option was introduced and remained a go-to artistic approach even after the Spanish seized indigenous territories. Hawikuh Polychrome also came to fruition, mesmerizing with its subtle sheen and contrasting colors.

How These Art Forms Have Transformed

Though the styles exude the same essence, technical developments have allowed for modern adaptations. These alterations are innocent and don’t seek to overshadow ancient methods. Perhaps the greatest change to take place was the abandonment of some glaze paints. Some artists still prefer glaze, but the introduction of matte paints inspired many to pursue an alternative creative avenue. As the artistic realm continues to progress, we can expect to see future advancements and adjustments, but Southwestern Native Americans are credited with breathing life into these renowned designs.