Navajo Hogans and the Ceremonies Held Within 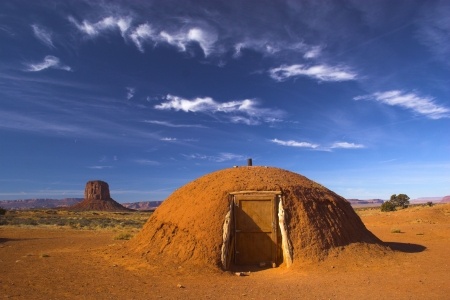 Every culture has its traditional home, whether it is a log cabin, a yurt, or an igloo. The Navajo people have the Hogan, a structure that has historically been not only a place to live but also a place of serious spiritual importance.

Hogans traditionally have been built in two different styles; a cone-shaped or “forked stick” Hogan, which is considered a “male” version. The more common, six-sided or round version of the dwelling, is a rounded “female” one. These female hogans are constructed of logs or stone with a dome-shaped roof with a hole in the center for the ventilation of smoke. The dome-shaped roof is formed of cribbed logs covered with dirt. Its door should face east to welcome the rising Sun, promoting good fortune for the inhabitants.

What Navajo people in the distant past might not have realized is that they were engaged in building “green” energy-efficient homes long before it became fashionable. Natural sources of ventilation kept the Hogan cool in the summer, while the tightly packed mud walls and roof provided effective insulation year-round. Of course, the Navajo people had their own practical purposes for staying comfortable without wasting their scarce resources.

In Navajo culture, Hogans are believed to have existed since the beginning of time, playing an important part in the Navajo creation story, in which, after forming the inaugural Hogan, the First Man teaches the Navajo people that every new Hogan must be ceremonially blessed after its construction. This blessing is performed by first touching the four main posts of the Hogan, which represent the four cardinal directions, then spreading cornmeal or corn pollen around the inside in a clockwise motion. This blessing is intended to make the Hogan strong enough to protect the family that lives inside from physical or spiritual harm. Other ceremonies, including healing, are also carried out in Hogans. For this reason, even if a Navajo family didn’t live in a Hogan, they would make sure there was at least one nearby.

Because Hogans are sacred, they are also associated with a variety of taboos. For example, if someone happens to die while in a Hogan, they are either buried inside or removed through a hole that is made in the northern wall. In either case, the Hogan is permanently abandoned by sealing the entry point or burning it to the ground.

In addition to serving as a home for the Navajo, Hogans have been customized throughout Navajo history to serve other purposes. Closing the smoke hole and inserting hot coals converts a Hogan into a sweatlodge. In the summer, a less insulated, more loosely constructed Hogan might suffice for a family dwelling. Today, while some Hogans continue to be lived in by Navajo people, most are maintained for strictly ceremonial purposes.

To learn more about Navajo culture and explore an extensive collection of Native American art and jewelry, visit Kachina House.