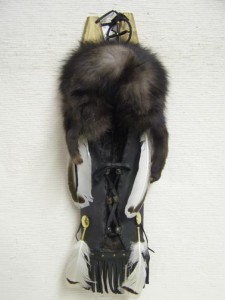 Similar to many mothers (and fathers) these days, Native American mothers of the past had many responsibilities while raising and taking care of the children. Always on the move or doing something, babies were generally placed in a cradleboard, also known as a baby carrier.

The twin hero gods are represented by the two back supports. The father binds these two slats together by drilling holes in them and lacing them with buckskin. He then constructs the footrest, and this too is attached by drilling and lacing it to the back supports. The footrest represents Mother Earth and is a constant reminder that it is on Her that we spend our lives.

The back supports and the footrest are traditionally made of juniper, the head protector of oak. The head protector represents the rainbow and is also a very practical form of protection from the elements.

The baby is secured to the cradleboard with laced thongs. Buckskin thongs were originally used because it was believed that the child would develop the same attributes as the deer and therefore would be wise, agile and quick. The lacings represent power, lightning and sun rays. Warmth will generate from the child because of these lacings.

Swaddled in a blanket, the baby was laced securely onto the board. Now the baby could be carried by the mother’s or set at an angle on the ground while she performed her chores and other activities without her having to worry about her child’s safety. After all, cradleboards were created not only for convenience, but as a symbol of the parents’ love for their child.

Not only a treasured artifact, smaller cradleboard were fashioned for young girls to play with, enjoy and prepare for motherhood.