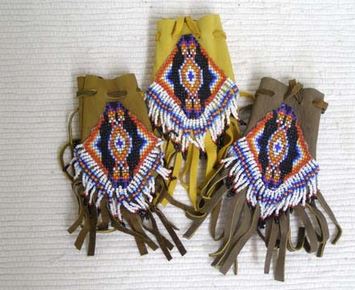 Native American beadwork is more than just colorful and visually appealing designs; it also represents a culture rich in symbolism and history.

This art form dates back centuries and has evolved as time has gone on. However, it is still an important part of today’s Native American culture. Early beadwork was inspired by a tribe’s customs, beliefs and dreams, and designs tended to be unique to specific tribes.

The rich history of Native American beadwork can only enhance your appreciation the next time you encounter it in person.

Originally, Native Americans used natural stone, bone, pearl and shell to create beads, which they shaped using handmade wood and stone tools. Since beads were handmade, creating just one bead was a time-consuming process. Traditionally, these beads were larger and were created to accent jewelry items like necklaces.

The introduction of small glass beads through European trading revolutionized Native American beadwork. These small pre-made glass beads eliminated the prep time necessary to create beads, and, in turn, made it easier for Native Americans to incorporate more beads in a single design. Glass beads also created new design opportunities, opening the door for more creativity in beadwork with the ability to incorporate a far wider range of colors in their designs. Due to the many advantages of small beads, trade beads were soon in high demand. Eventually replacing quillwork, beadwork was soon integrated in other Native American items like art, clothing, tipis, moccasins and bags.

Beadwork is still highly respected within Native American culture and prominent in arts and crafts. Symbolizing the culture, beadwork is now included in museums as part of exhibits on Native American art and culture. One of the most widely seen uses of beadwork today is in costumes worn during traditional Native American dances and celebrations.