A History of Native American Knives 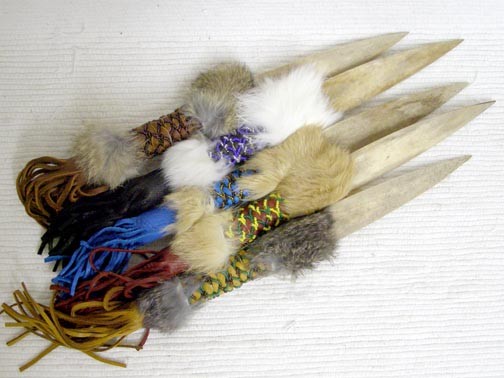 Of all Native American weaponry, lancets, spears, tomahawks, and bows and arrows, knives were the most useful and versatile.

Considering that the natives hunted their own food and made their own homes, boats, clothes, cradles, bed frames, traps, musical instruments and more, it’s easy to see how knives would come in handy. Even women were rarely without them.

It was a harsh, challenging environment. In so many ways, a quality knife could mean the difference between survival and death. 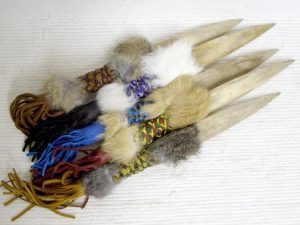 The first Native American knives were made of sharpened stone like flint, obsidian or chert. Later on, bone, antler and even oyster shell came into use. Copper blades became popular among tribes in the Northwest.

Making a sturdy blade involved hours of grinding, sharpening and polishing. Handles were carved from wood, antler or animal horn. Blades were usually attached to handles with a tough cord made of animal sinew and glue made of tree resin. Compared to the swords that Europeans favored at the time, Native American knives had significantly shorter blades. Different blades were fashioned for specific purposes such as cutting, thrusting, slicing or slashing. They might be curved or straight, lightweight or heavy.

Small knives were even used as eating utensils.

Simply put, knives may have been as ubiquitous as cellphones are today. Making knives was one of the most important roles of every male head of household.

Unlike modern store-bought knives, Native American knives are works of art. Each reflects the needs and unique personality of the craftsman, so no two are alike.

Men painstakingly decorated the handles with fitted antler carvings, fur or animal feet. Some rare knives have inlaid turquoise in the handle. Since the blades are longer and are crafted of stainless steel, they were obviously made after the Europeans arrived and influenced design.

The largest knife was carried in a leather sheath at the waist. A smaller, lighter tool about the size of a pocketknife was worn in a pouch tied around the neck. Still today, women carry these types of knives inside their tops for protection. These sheaths and pouches, decorated with feathers, fringe and brightly colored beadwork, display extraordinary talent and attention to detail.

Making a knife was hard, time-consuming work that Native American artisans took great pride in. Knives were often passed down in families and treated with nothing short of awe.

Native Americans were and are deeply spiritual people. Their beliefs are so complex and ingrained that they’re almost impossible to explain to people who are not immersed in the culture. Intimacy with nature and respect for the environment are integral parts of worship.

For that reason, a man probably chose the materials for his knife with great care and deep reverence. He was humbly grateful for the stones, plants and animals provided for his use. Making his knife was a spiritual experience. The final product was highly personal and rich in meaning.

Native American weaponry, particularly a finely crafted knife, is inspiring. Each piece tells a story. It could make one think of a young family preparing a meal together. It could evoke a darker history of betrayal or revenge. 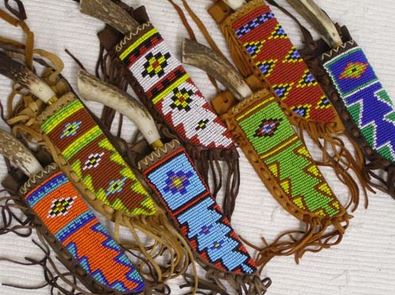