What Is Pueblo Pottery? 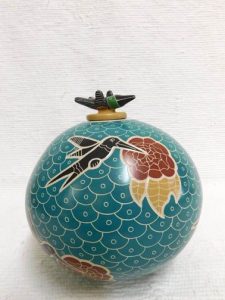 Pottery is widely used by indigenous cultures around the world. The Pueblo Indians used pottery for practical purposes and to express the unique aspects of their culture. Many pottery artifacts have been discovered by archaeologists who study the smallest of sherds, and handcrafted pieces are still produced by the descendants of native tribes. Pueblo pottery is a beautiful treasure that you can use to make your home look unique while showcasing your appreciation for history and art.

Who Were the Puebloans?

There were thousands of Indian tribes living in North America when the settlers arrived, so it is common for people to confuse the different tribes that lived in the U.S. before the 20th century. Puebloans lived in the southwestern U.S. for about five centuries before they were defeated by the Spanish conquistadors in the late 1600s. When the settlers arrived, Puebloans were living in huts made from adobe, stone, and other natural materials.

Researchers believe that Puebloans were nomadic until around the 14th century. When Puebloans settled down, they began to create pieces that were more permanent and items they would be able to use to store food and water. Since the Pueblo Indians had adopted organized farming practices, they had plenty of time to produce pottery, stone sculptures, and beautiful weavings. The unique artwork that the Puebloans produced is found nowhere else in the world, and it is widely seen as some of the most beautiful Native American art in existence.

What Is Pueblo Pottery?

Pottery is arguably the best art that the Puebloans produced. The artwork was made from clay that was dug out of the dry hills of deserts in New Mexico, Arizona, and Texas. Although Puebloans lost much of their land to American settlers, most pottery is still made from the natural clay and painted with natural pigments found in the southwestern U.S. and northern Mexico.

How Pueblo Pottery Was Made

Traditional pottery produced by Puebloans is created by hand, no pottery wheels, no kilns to fire the pieces. Craftsmen would use their hands to create smooth shapes. The potter might use a flat stone or a piece of metal to thin the pot and smooth the surface.

Once the pottery had been shaped to the craftsman’s satisfaction, the clay pot would usually be left out in the sun to dry. After a couple days, the pot would be painted with natural pigments reflecting symbols that were important to the people. Upon finishing the design of a pot, the item would be moved to an open-pit fire. Here is where the pot would be placed and then covered while it fired for a few hours. Once the pottery was fired to a certain hardness, the fire would be allowed to die down and the pot would slowly cool until it was safe to remove it.

Native American pottery produced by Puebloans is still in demand today. Finding authentic pottery can be challenging since there are many international brands that produce similar pottery overseas. Kachina House, therefore, sells only authentic Puebloan pottery. The Pueblo pottery that is available today still uses the traditional methods that Puebloans have used for centuries.

Pottery made by Puebloans is perfect for an accent inside your home to give rooms additional character. Pottery can look especially good on top of wooden furniture pieces and in rooms designed to have a rustic appearance. Native American pottery can make your home look better than ever with timeless artwork that is sure to interest your guests.