The Lizard in Native American Culture 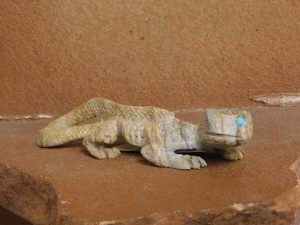 Walking along desert trails, hikers may see small animals scurrying away as they approach. Lizards live in many regions of North America. However, since they are cold-blooded reptiles, the largest number are found in the southern regions where the climate is warm for most of the year. Lizards are especially prevalent in the desert southwest where they can be found sunning themselves on warm rocks and darting in and out of cracks and crevices. For the Native American tribes of the Southwest and the Plains, these creatures are important cultural figures.

A Symbol of Healing and Rebirth

Many species of lizard have a remarkable healing abilities. They can lose their tails as a way to escape predators and regenerate the lost body part. In addition, like many reptiles, they shed their skin periodically as they grow. For this reason, several Native American tribes link this animal with healing and renewal. For example, the tribes of the Southwest refer to the horned lizard as Grandpa and associate it with sacred healing powers.

In one Navajo story, Coyote tries to play a game with a group of lizards who are sliding downhill on rocks. They warn Coyote that this is a game for lizards, and he is too large and will probably be injured. Ignoring their warning, Coyote slides on a large rock that flips and lands on him. As an act of kindness, and as a way to clear him from the playing field, the lizards circle around him and use their power to bring him back to life.

These reptiles are also seen as a sign of luck. Perhaps their ability to survive in the harsh climate of the desert led to this belief. It may also be that their ability to hide quickly made it a good omen to see one. Whatever the reason, different tribes demonstrate the importance of this animal in several ways. As an example, some tribes of the Great Plains tie the umbilical cord of a newborn boy into a lizard-like shape. This symbol is supposed to give the boy enhanced fortune, healing, and masculinity.

A Link Between the Spirit World and the Human World

Due to their ability to regenerate, people consider these creatures as a link between the human world and the spirit world. In a creation story of the Pomo tribe of northwestern California, Lizard and Coyote wrestle to decide how human beings should appear. Because the reptile wins, human beings are given hands with fingers rather than paws.

Among the tribes of the Southwest like the Navajo and Hopi, Gila Monster is known as a powerful and magical figure. His hard scales keep him safe from all sorts of danger. He is sacred to medicine men for his ability to understand injuries and protect against them. They tell stories of Gila Monster stepping into battle and bringing fallen warriors back to life. There are also stories of warriors who went to battle wearing armor in the distinctive black and yellow pattern of Gila Monster.

The Hopi tribe celebrates a figure known as Monongya Katsina. Like all of the Katsinas, Monongya acts as a link between the spiritual and the human. In ceremonial dances, he arrives wearing a mask with the turquoise color of the eastern collared lizard. This species is known for its bright appearance and quick speed. Monongya is a warrior who encourages the people to act like true Hopi. In many ceremonies, it is his job to chastise those who act foolishly. He is also known for his matchmaking skills. This Hopi warrior and his smaller relatives in the desert remind the people that they are part of a sacred landscape.

If you’re interested in art depicting the symbol of the Lizard, check out this Zuni Carved Lizard Fetish by Bern Laselute.