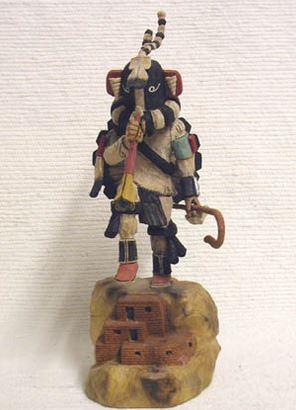 The ceremonies and activities for this season include Hopi people of all ages; the only ones without duties are the elderly and small children. During this time the men fulfill their duties by tending crops and livestock and performing ceremonial duties and the women spend a great deal of time grinding the corn that was stored last season and preparing meals.

An ideal Katsina doll for Hakitonmuya is Kokopelli, the Humpback Flute Player. Kokopelli is an engaging image that originated in ancient Paleo-American culture and was brought into the present by the Pueblo Indians. This classic figure of a bent over hump-backed being playing a flute has been associated with shamanism and supernatural qualities. Kokopelli is a magical being who, by playing his flute, calls the clouds to make rain. Today, the Hopi play flutes over the springs to attract rain. Kokopelli is also a symbol for fertility because he carries seeds and mist in his hump. He is mischievous when it comes to seducing young maidens! The Navajo counterpart to Kokopelli is the Humpback God who wears mountain sheep horns. His hump, which has eagle feathers radiating from it, also contains seeds and mist. He carries a wand and is called the “God of Mist,” “God of Plenty,” or the “God of the Harvest.” He is usually portrayed with an image of corn. It is interesting to note that the hump, often thought to be an abnormality or deformity, is considered special, even magical and transformative like fantastic creatures such as unicorns and griffins. Shamans are often deformed or have narrowly escaped physical death.

As a time of transition, Hakitonmuya heralds change, and change has a very important place in Native American cultures. It means transformation, newness, and May is the month for ceremonies surrounding this change. Hakitonmuya is a natural part of the cycle of death and rebirth and as such, is much revered and celebrated among the Hopi. May has a special significance in the Hopi culture and carries with it hopes for the future.