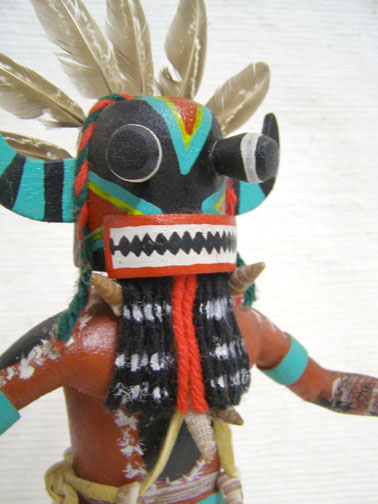 Every spiritual path has its protectors. The Puebloan belief system employs Katsinam to act as guards during ceremonies and as guides for mankind.

Dolls and figurines have always played a sacred role in spiritual and cultural ritual and ceremony. The Katsina doll isn’t a toy; rather it is a symbol of the Katsina that it represents. They are the messengers and the spiritual guides for the Puebloan cultures.

The Wuyak-kuita is a guard who prevents disobedience on the path of the Katsinam. In contemporary times this Katsina in an Old Style version is hung inside the home by the front door to protect the inhabitants from evil spirits.

Katsina dolls specific to the Puebloans have been interpreted by artists throughout the years in various ways. From carved masculine statues to smaller less frightening figures. The Broadface Katsina is typically portrayed carrying yucca fronds which he cleverly uses to taunt and attack clowns and protects the dancers. He plays an important role in wintertime Bean Dance processions where his job is to keep everyone moving and in line.

Hopi artist Everett Curley created the Katsina doll featured on the left during the 1970s. This Broadface shows leather trimmed with shells and real pheasant feathers. This antique Katsina doll is available for sale on kachinahouse.com