Basket weaving is one of the oldest known Native American crafts. Traditional Native American baskets are made from a variety of natural materials. From pine needles to sweetgrass, materials used to create these woven vessels reflected the natural resources that each tribe had readily available in their environment. Cherokee and Southeastern tribes most commonly used pine needles or wicker. Northwestern tribes used cedar bark, swamp grass, or spruce root. The Hopi and Navajo tribes are known for using tightly coiled sumac or willow. 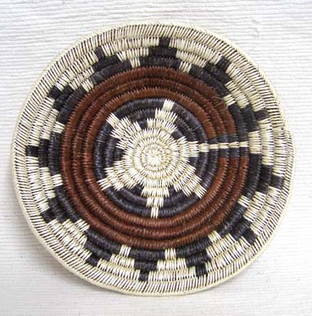 For thousands of years, each tribe developed their own techniques that worked best with available materials and cultural needs. Today, many of the techniques have blended together. Coiling and weaving are two techniques that we see as most prevalent today.

Some baskets were woven with designs featuring symbolic figures or tribal patterns. The most talented basketmakers created intricate designs. Baskets were used for everything from cradles to bowls. They helped to transport foraged foods and hold important items. The Navajo people are known for weaving “Wedding Baskets” which can be viewed as a chart for their lives. The central piece of the basket represents Mother Earth through which the People emerged. The white that follows represents birth; and as you travel outward, the colors get darker to symbolize struggle and pain. Eventually the dark colors turn to red which is meant to represent marriage and the mixing of families. Following are more spurts of dark hardship interspersed with white. The outer white symbolizes enlightenment without darkness.

Fortunately, there are still crafters that have the ancient knowledge and the creativity to weave traditional baskets. We carry Hopi Burden Baskets, Chippewa Baskets, Navajo Wedding Baskets and more.
Check out the video below to learn how traditional pine needle baskets are created: