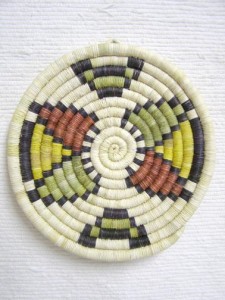 Baskets have played and continue to play a significant role in many Native American traditions, including the Hopi, indigenous people located on three high and rocky mesas in North Central Arizona.

Hopi are very spiritual people who center their lives on their beliefs. Many ceremonial dances throughout the sacred Hopi Calendar utilize baskets for holding and passing certain items.

The month of September is important in Hopi tradition. This is the month for the Nasanmuya: Maraw, Harvest. This ceremony celebrates the September harvest season and marks the beginning of the womens’ ceremonies. The women and men who have been initiated into the Maraw society are the only ones to perform this ceremony, which is meant for prayer and meditation.

Before this ceremony, the task of creating baskets takes place. In the Southwest, Native American baskets are made from three different techniques, weaving, plaiting and coiling. In the Second Mesa, the women coil plaques and baskets while in the Third Mesa, wicker baskets and plaques are produced.

Wicker plaques and baskets are used in various ways within Hopi traditions. In everyday living, the baskets hold foods such as ground corn, corn on the cob and piki bread.

At ceremonies including the Nasanmuya womens’ ceremonial dance, wicker plaques are most often used. The baskets and plaques are used to hold prayer sticks and feathers in addition to bean sprouts.

At Kachina House, we have many beautiful handcrafted wicker, coiled and plaited baskets available for sale. Just as in spiritual Hopi traditions and ceremonies, our baskets can play an integral part in your everyday living.