The History and Many Uses of a Native American Tomahawk 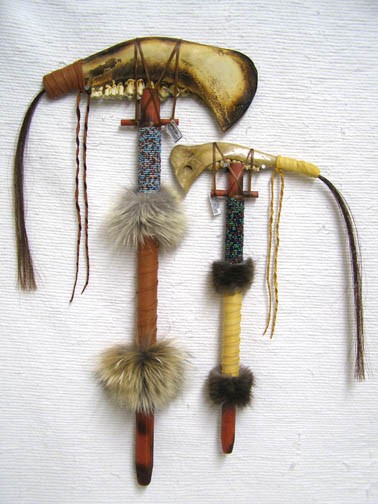 It is generally believed that the term “tomahawk” originated with the Algonquian peoples, a group who spoke Algonquian languages and lived mostly around the Great Lakes, along the northern Atlantic Coast and around the Saint Lawrence River. They also lived in the dense forest regions of what is presently known as Ontario, Canada. The Algonquian peoples relied heavily on hunting and fishing for their food although they also cultivated crops, such as squash, beans and corn.

Origination of the Term

The term “tomahawk” is likely a derivation of the words “tamahak” and “tamahakan,” both of which were used by the Algonquian peoples to describe an instrument used for cutting. Their tomahawks were originally constructed of triangular-shaped stone heads and wooden handles bound together by strips of rawhide. The rawhide would shrink as it dried, producing a very tight bond. Other peoples may have used bone or shell in lieu of stone. After being introduced to metal blades by the Europeans about 400 years ago, the Algonquians perfected the art of making sophisticated metal-bladed tomahawks.

A Native American Tomahawk looks very similar to an ax or hatchet. However, tomahawks have a straight shaft and are usually less than 18 inches in length. Native Americans used tomahawks for various purposes, including:

Many Native Americans used tomahawks as general-purpose tools. Because they were small and light, they could be used with one hand. This made them ideal for such activities as hunting, chopping, and cutting. Both the Navajo and Cherokee peoples used them in this way. The development of metal-bladed tomahawks expanded their use even more. Most Native Americans had their own individual tomahawks, which they decorated to suit their personal taste. As Native American artwork shows, many of these were decorated with eagle feathers, which represented acts of bravery.

Tomahawks have been used as weapons for hundreds of years. One thing that makes them so effective is their versatility. They can be thrown or used in hand-to-hand combat. In fact, they are so effective that the U.S. military is currently using them as a weapon in Afghanistan and Iraq. In addition to hand-to-hand combat, the military uses them to enter buildings and take down doors. Native Americans primarily used them, though, in the same way that melee weapons were used during the Middle Ages: as an extension of the arm. Their purpose was to cut into or inflict blunt-force damage on the enemy.

Although Hollywood movies often show Native Americans throwing their weapons, it is doubtful that this was a common practice. For one thing, the early versions made of stone would not be very effective when used in that fashion because the heads were more of a blunt instrument than a sharp blade. Also, throwing them would limit the weapon to a single-use, an action that could prove fatal in a melee battle. However, there is some evidence that both Navajo and Cherokee tribesmen were experts at throwing tomahawks for hunting purposes.

Tomahawks were often used in important Native American ceremonies, such as the signing of a peace treaty. In some cases, they were put away in ceremonial fashion at the end of hostilities between various factions. This is where the modern term “bury the hatchet” comes from. Tomahawks used for such purposes were often elaborately decorated with paintings, carvings, inlays, and feathers. Some of the more popular models were referred to as pipe tomahawks or smokerhawks. They incorporated a bowl and a hollowed-out shaft so that the tomahawk could be smoked. Pipe tomahawks were often presented to other tribal chiefs and Europeans as a goodwill gesture.