Navajo rugs of today exemplify the history and customs of the Navajo people. Since the mid-1600s, Navajo women have been creating these impressive works of art that began as garments and wearing blankets. As these creations drew the attention of others from outside the region, the demand for additional designs increased. Today, both men and women from the Navajo Nation share in this highly skilled craft filled with a rich tradition.

The Navajo Craft of Weaving

Learning about weaving from their Pueblo neighbors, the Navajo soon became known as the most skilled weavers of the time. They credit their weaving ability to teachings from Spider-Woman, who taught them how to use the elements and colors of nature within their work. 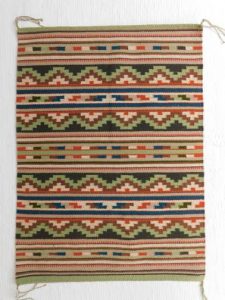 The Chief’s blanket got its name because a Navajo was considered wealthy and powerful if he wore a Navajo blanket. The pattern first utilized only horizontal lines but soon evolved to include serrated diamonds. Basic colors of brown, white, and indigo were prominent in these designs, they are colors that could be achieved naturally by soaking the wool in various liquids.

With the introduction of the railroad and trading posts, Navajo had access to a broader range of yarns and colors. Germantown blankets showcase reds, oranges, and yellows. Eyedazzler blankets have a zigzag diamond pattern in bright colors. The transition blankets mark the time period when buyers switched from using blankets for clothing and opted for Navajo rugs.

Subsequent woven rugs of the time were typically named for the trading post at which they were sold. Traders influenced the styles and patterns of the rugs based on what the buyers wanted.

Ganado and Klagetoh rugs display a large diamond motif in the center while Crystal styles were based on Oriental patterns that the Navajo adjusted to relate to their own cultural heritage. The storm pattern used rectangles in the center and corners attached with zigzag lines. Colors typically consisted of gray, red, white, and black.

Hooks, X, and T shapes were incorporated over time. The popular cross shape represents Spider-Woman and generally has a true or graphic opening or hole since she can’t be contained. Another facet is the Spirit Line. Often seen as a mistake to buyers, this line of contrasting color extends from a center pattern out to the edge of the rug to prevent the weaver’s creativity or spirit from being trapped within the rug.

Today, you can find work that incorporates a combination of modern and traditional culture in a range of Navajo rug designs. If you’re looking for rugs that are handmade by weavers using hand-dyed wool, shop authentic Native American Navajo rugs in various patterns at Kachina House.