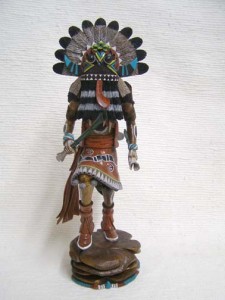 The Broadface Katsina (Wuyak-kuita) is a Warrior Katsina and among a large group of Katsinam who are considered guards; their role is to prevent any disruption in the Katsina ceremonies. They protect and surround the more sacred Kachinas. Because of their role, they are sometimes referred to as the Angry Katsina or Watching Katsina. In earlier times the Broadface, among other Katsinam, were responsible for ensuring the annual cleaning of the springs occurred. This Katsina carries yucca fronds that he uses frequently as whips, particularly on the clowns, who are terrified of him. He is an important figure in the winter Bean Dance (Powamuya) procession.

The Old Style or Traditional carving of a Broadface is frequently hung just inside a door to the home to guard and protect the home and its inhabitants.