Every culture carries its own emblems. These emblems are deeply representative of the people and they can carry spiritual significance. For the Hopi, one such emblem is the katsina doll.

An Overview of Katsina Dolls

The Hopi are a peaceful people. Today, more than 9,000 Hopi people live together on a reservation in Arizona. Although the world has changed a lot over the centuries, the Hopi tradition of making Katsinam has remained unchanged. Katsina is actually a term that refers to the Hopi spiritual beings. Thus, the Katsina doll meaning is always deeply spiritual. The dolls have been made for generations, but the first ones encountered by traders were noted in 1857. These dolls were traded on and off over the next century, but there has been a renewed interest in Katsina doll meanings in recent years. In the Hopi culture, these dolls are given to girls until their marriage and have not been used as toys. 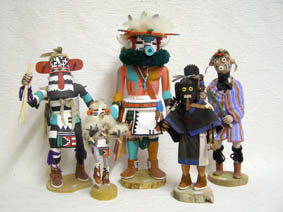 How Katsina Dolls are Made

The old style or traditional carvings are simple in style with most of the detail on the mask each wears. The dolls are made from wood, carved by hand by Hopi craftsmen. Traditionally, the Hopi preferred the roots of cottonwood trees. These trees are not as plentiful in the modern era, making it much harder to find the raw materials for the dolls. Once the doll is carved, it is prepared for detail with whitewash. This is traditionally done with a kaolin clay, but modern alternatives do exist. Once the piece is prepared, the painting will begin. The process of painting is highly detailed. Traditional choices for paint included vegetable dyes. In addition to the carved wood body of the doll, many of the Katsinam are accessorized with rattles, weapons, horsehair and feathers.

The Katsina doll meaning still varies substantially based on the figure that has been carved and the accessories it carries. For example, guard Katsinam will carry yucca whips because these guards must keep crowds from moving in too close to the dancers during a Hopi ceremony. If the Katsina is using long sticks almost like canes in its hands, then the doll may be an animal like a deer or antelope. The figures themselves also carry special significance. For example, a frog might be carved to bring rain. On the other hand, a bear might bring healing to someone who is sick. In general, Katsinam are given twice a year as a constant reminder of the importance of these spirit beings. These beings who live among the Hopi, and the carved Katsina dolls are a reminder and celebration of their presence. In total, there are more than 400 different known Katsinam.

While the carving of Katsinam is ancient, the practice lives on. Contemporary dolls are made to share the Hopi spiritual world with everyone. You can look at the vast selection of dolls at Kachina House. We have many different options for you to consider, and each one carries its own special significance. By understanding the different Katsina doll meanings, you will be able to select the right one for your home or family.