The Art of Native American Sculpting and Carving 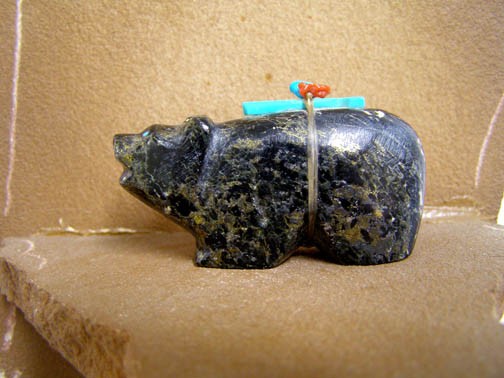 At Kachina House we offer a variety of different carving arts.

Carvings of wood, stone, and other materials, are a major art form in Native American culture and have a rich history. Many tribes have made carving and sculpting foci of their art for centuries and carvings are now found in homes all over the world.

However, the origin of carving was representative of the strong ties between nature and Native American culture, an important relationship for the large majority of tribes.

Although many tribes first started sculpting using wood, others located in the southwest of North America started to carve in stone.

These people would create stone carvings that represented animals, humans, and other important aspects of their life. An individual tribal member might carve a salmon because the fish was a main food source.

The Zuni tribe carved what are referred to as “Zuni fetishes.” Fetishes were sculptures and carvings of animals that were used often in religion ceremonies.

These fetishes were believed to have a tremendous amount of power because the people believed they connected the earth and humans.

The early Zuni carvings were referred to as “Ahlashiwe” which the Zuni believed were real animals that were turned to stone by the Sun Father. These were and are a major part of the Zuni culture and each animal served as a different form of help or protection.

The Cherokee tribe was specifically committed to wood carving. They frequently carved practical items such as wood spoons that they used to prepare meals.

The Cherokee tribes also carved wood pipes which they sold throughout the eighteenth and ninetieth centuries for economic benefit.

Different tribes used different materials to carve, and it often depended on what materials were locally available and what they were working to create. The Hopi tribe often carved Katsina dolls, which reflected religious icons, out of whole cottonwood roots. Other Puebloans typically formed figurines out of clay from the earth. Many tribes carved items from wood, stone, and ivory.

These beautifully created sculptures and carvings were used for storytelling, dancing, and religious worship.

If you are interested in purchasing a Native American carving, visit Kachina House to find the one that inspires you.