What is the Native American Storyteller Doll? 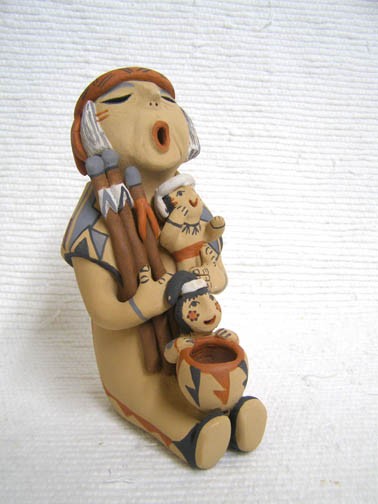 It’s easy to argue that the foundation of art is culture. An artist is driven to create by his or her individual beliefs, values, and life perspective—all of which are heavily influenced by the society in which they live. Diving deeper into different pieces of Native American art is a fascinating way to learn about their history and culture.

One of the most exceptional visual depictions of culture is the Native American Storyteller Doll—sometimes called Pueblo Storytellers. These unique sculptures embody not only beauty and creativity, but also symbolize important American Indian principles and traditions.

Learning about the Storyteller Doll is an imaginative way to gain insight into how the Puebloans lived and what influenced their development. Come hear the story of the storyteller, and then choose a figurine that speaks to you to add to your collection!

The Storyteller Doll is one of the most popular and special forms of clay art.

A Pueblo Storyteller’s distinctive features include an open-mouthed figure surrounded by children, animals, or both, that listen to the stories. The storyteller can be male, female, a clown, or any kind of animal. There is always at least one listener, but there can be as many as the artist desires.

Listening children often encircle the storytelling figure or climb on its back. An open mouth is either painted or sculpted on the storyteller—so he can tell his stories—and sometimes on the listeners as well. The figures sometimes hold important Pueblo objects as well, such as drums, pottery, rugs, and other meaningful artifacts.

The first Pueblo Storyteller was made by artist Helen Cordero in 1964.

Helen was a Cochiti Pueblo potter from Cochiti Pueblo, New Mexico, who grew frustrated with making typical forms of Native American pottery. She started out by sculpting “singing mother” figurines with open mouths and children in their arms.

The Storyteller Doll is much more than another style of pottery.

The Storyteller Doll represents the crucial role of oral tradition and tribal storytelling in not just the Pueblo tribes, but in Native American culture as a whole. 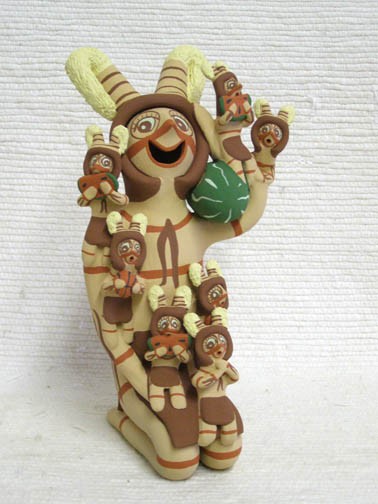 Before we wrote books and saved documents to a computer, the legends and myths of a society were passed down orally. This is why in American Indian culture—and many others for that matter—the storyteller is a revered and almost mystical figure. The stories they held were sacred; a means of preserving the thoughts and experiences of an entire culture.

Tribal elders used stories as a medium to pass down cultural values to future generations. Mythologies teach and instill the principles, morals, and belief systems of a society in those who are listening. Stories are powerful Native American tools, and the Storyteller Doll is a means of connecting to the storytellers and doctrines of a specific tribe.

Storytelling is a universal art.

The importance of storytelling extends far beyond Native American society, which is why the popularity of this figurine has grown tremendously since its creation. Stories allow us to connect to the past, envision the future, and experience our heritage in an interactive and meaningful way—making them timeless and invaluable.

Each Pueblo Storyteller is an expression and adaptation of a unique ancestry and spirit that differs from tribe to tribe, and from person to person. There is a sculpture out there for everyone, ready and waiting to tell each and every individual story—come find yours today at Kachina House!

Our wide and unique collection of Storyteller Dolls are handcrafted and sought by collectors all over the world. Don’t miss out on discovering a Pueblo Storyteller that’s perfect for you!