Native American prayer fans are lovely additions to rustic décor, but they also have deep significance in traditional culture. Created in the belief that birds link the physical world to the spiritual one, they are regarded as sacred objects in prayer and healing ceremonies.

Prayer fans are crafted according to the location, customs, and tribal beliefs of the artisan. There are several styles, and many types of feathers are used. Each fan is a unique, richly symbolic work of art. 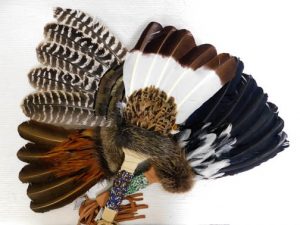 Since each feather represents the spirit of the bird, craftsmen select feathers one by one and with great reverence. It could take weeks or months to gather just the right combination. Only Native Americans are allowed to have the feathers of federally protected birds such as eagles and hawks, so gathering these feathers that have spiritual significance is a great honor.

Eagle feathers are especially prized because they represent strength, bravery and holiness. When an eagle feather is dropped during dancing, there is a special ritual for picking it up.

Turkey, pheasant and other bird feathers are popular as well. Full wings are typically used by powwow dancers. For worship in the Native American Church, tail feathers are more common.

Before assembling a fan, each feather is carefully cleansed with herbs. Feathers are sorted by left side and right side according to where they came from on the bird. Straightening, trimming and “preening,” which makes the feathers uniform, is a painstaking process.

Even the arrangement of feathers has special meaning. For instance, Navajo prayer fans made with eagle or hawk feathers have 12 tails. The feathers are placed to represent male and female or father and mother. Navajo believe that everyone has both a stern, fatherly side and a nurturing, motherly one.

Decorative fringe is made of buckskin which honors the deer. Native American depend on deer for food, shelter and clothing. In Navajo culture, fringe also represents one’s roots.

Handles are fashioned from bone, wood or leather and sometimes are adorned with beadwork or quillwork. Bead colors are carefully chosen to represent water, the sky, the dawn, plant life or other elements in nature.

Types of Native American Prayer Fans and Their Uses

Native American fans are designed for specific purposes. Here are some examples:

Side-drop fan: As the name implies, it opens to only one side. Gourd dancers, Southern Straight dancers, and worshipers use it.

Loose flat fan: This fan is primarily used by men in peyote ceremonies or dances. The feathers are strung together rather than permanently affixed to a handle, which allows them to sway freely. The loose flat fan sometimes operates like a drop fan, and it can be folded and stored in a slim box.

Stiff flat fan: The feathers are bound to the base with leather to prevent movement. This is a double fan with the front and back sides decorated. Females use this fan in peyote ceremonies or jingle-dress dances.

Double-sided stiff flat fan: This design features 24 tails. It can be held from either side or converted to drop from only one side. It is common in powwow dancing and peyote ceremonies.

Native Americans are spiritual people who seek to protect the earth, carry on the traditions of their ancestors, and see that future generations live in peace, freedom, and good health.

In generations past, prayer fans were used solely as instruments of physical healing. Today, they are thought to help heal a spiritually ailing heart and soul as well.

In a ceremony for physical healing, medicinal plants like sage and sweetgrass are burned over cedarwood. The prayer fan wafts the healing smoke toward the sick individual. Known as smudging, this ceremony incorporates the four elements: earth, air, fire, and water.

In religious rituals, a fire is lit. The fan waves the smoke — and a specific prayer — toward the Great Spirit above.

So much meaning and history is attached to our beautiful Native American prayer fans. We are both proud and humbled to offer them.